I used to blog on another platform. Check out what I shared in earlier years here.

For the last few weeks my class has been making a movie called “The stolen princess.” First before we started we created potato people. My potato at first was kind of  small and had started to grow roots on its small head. I made mine as a normal citizen. I struggled at first but then I finally did it.

The materials I used were glue, purple material, plastic flowers and I used ribbon to try to make a purple halo to match the clothes. After we finished making our potato people we started to plan what our story would be about.

Meanwhile we finally got an idea what our story was going to be. We started to make a background scenery and I was in the group that was making the inside of the castle. We also made thrones for the potato king, the potato queen and the potato princess.

The background scenery was the evil layer, the party scene and the rocket. When I was painting the background for the inside of the palace I got a lot of red paint on my jumper but luckily when iIgot home my mum did not get angry.. Phew!

Before I started painting the other people in my group helped me make thrones for the king, queen and the princess oh and yes we also painted the thrones in purple! Once we all finished making our potatoes we started to record and make the film. We had help from Mrs Toland.

When we finished filming the potatoes we did the voice over part. When my group was doing the voice part we had a lot of laughing happening! We all enjoyed making the movie and we hope you enjoy watching it on the big screen along with us. 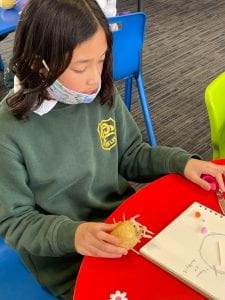 3 thoughts on “The process of making our class movie”

About Me | Ko Wai Ahau

Add the link to the About Me blog post here.

Keep connected with this blog